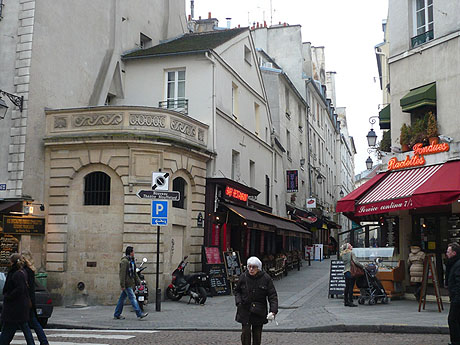 "If you are lucky enough to have lived in Paris as a young man, then wherever you go for the rest of your life, it stays with you, for Paris is a moveable feast

Ernest Hemingway 1950
Hemingway lived at No 39 rue Descartes in 1922. Walk up to Place Contrescarpe and continue towards St Etienne-du-Mont. Look for the date plaque on the building. 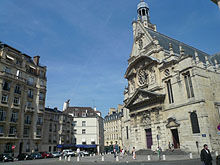 "We had a wonderful stay, loved the apartment, the restaurants and the amazing food markets. What a pleasure to have a private taxi pick us up at the airport. This was our third stay in Paris and I can’t believe that we hadn’t previously come across rue Mouffetard. Loved the area, can’t wait to return."
Bruce and Sandra

Rue Mouffetard follows the course of the ancient Roman way that led into the city from Italy. The ancient Roman Theatre can still be seen in a park setting just down the hill from Contrescarpe, on the way to Cardinal Lemoine metro. A city gate was built at the top of the hill in 1200, known as La Porte Bourdelle, just near the commencement of rue Descartes. 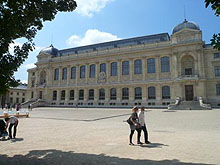 If Place de la Contrescarpe is the “village square” of the neighbourhood, then rue Mouffetard is the backbone of a network of narrow streets that criss-cross down the eastern slope of La Montagne Sainte-Geneviève. The area is recognised as one of the oldest and liveliest neighbourhoods in Paris.

Rue Mouffetard retains its medieval character, having escaped the influence of Baron Haussmann when he created the famous boulevards during the reign of Napoleon III. The lower, pedestrianised section is full of charm – succulent food stalls through which locals and visitors wander, exploring a huge selection of foods from many parts of France and abroad. 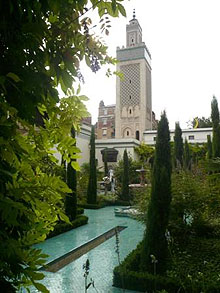 Like most shops in Paris, those along rue Mouffetard open at 10.00am and close around 9.00pm in the evenings. Many are closed on Mondays. The busiest time is Sunday mornings when the street resembles the crowded energy of medieval times, filled with fresh fruit and vegetables bursting with flavour. Seek out the speciality shops selling cheese, bread and pastries, pasta, gourmet produce from the French countryside, fresh seafood, wines and chocolates. There are even several Asian gourmet outlets and a great Greek food shop at the bottom of the hill.

We have thoroughly enjoyed our stay in your apartment. It has been a wonderful base from which to explore the delights of Paris. Each evening we looked forward to returning to the comforts of a well thought out home. So much nicer than a hotel room. We also enjoyed exploring the street meeting some of the personalities who were unfailingly welcoming, shopping locally and then at night enjoying the quietness of the apartment. Thank you for the opportunity to enjoy it. Ingrid and Hans

Don’t forget to visit the famous Place Monge markets, just around the corner at the Place Monge metro station. The market is open on Wednesday, Friday and Sunday mornings. It attracts shoppers and sightseers from all over Paris.

Almost all of the buildings along the rue Mouffetard date from the 17th century. The City of Paris has long imposed strong conservation protection measures to ensure that the street retains its charming character.

Before the 15th century the borough of Saint-Medard lay on the banks of the river Bievre and took pride in its vineyards and bucolic surroundings. Some prominent Parisians built splendid country homes in these sunny parts. But when the area became the centre of butchers, dyers and tanners, the river soon lost its attraction. 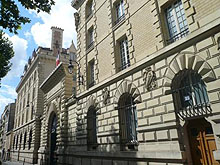 By the middle of the 17th century there was a convent where the Garde Republicaine building now stands, just up the street from the apartment. This imposing complex opens to Place Monge. The church of Saint-Medard, on the square at the bottom of the street, was originally the parish church, located on the edge of the river Bievre, where it met the street. The current church dates from the 15th century. It was built on the site of a 7th century church that had been destroyed by Norsemen in the 8th century. The early remains of this church were only discovered in 1978.

Don’t forget to seek out the Jardin des Plantes, the botanic gardens of Paris, located in the grounds of an 18th century town house that served as the residence of the Director of the Gardens. This grand building was recently converted into the Museum of Natural History, a marvellous creation with displays that will change forever your ideas of how museums should display their collections.

Nearby is the main Mosque of Paris, a gem of Moorish architecture erected in 1926 to honour the contribution of France’s Muslim troops to the First World War effort. Wander in and admire the arcades and gardens, with magnificent mosaic tiles. The Mosque also has a series of attractive garden courtyards where you can enjoy excellent food at good prices.